Eating your way through the best restaurants in South Beach can take some trial and error. We’ve all fallen prey to a South Beach bait-and-switch before. The area is ripe with places that are, to say the least, sketchy. But the chunk of Miami Beach south of 23rd Street doesn’t necessarily deserve the bad reputation it’s gotten. Off Ocean Drive, you’ll find one of the best bakeries in Miami, some of the best bars in Miami and (obviously) some of the best Miami beaches. And now, finally, South Beach has serious culinary contenders. Allow Xperiorlist to introduce you to them.

The stampede of pricey steakhouses on South Beach leaves most diners wondering which restaurant merits the hefty price tag for pounds of porterhouse and gobs of lobster topped mac and cheese.

Ocean Drive is the heart of the Art Deco District with landmark properties and buzzing neon lights, but only a few restaurants are as charming and popular as Chef Laurent Tourondel’s LT Steak & Seafood at the Betsy Hotel which serves as the primary food & beverage source for the property and turns out perfectly grilled meat and fish. Dine indoors or alfresco on a front porch overlooking the South Beach scene and you’ll be charmed from the start by the chef’s signature popovers which come to the table steaming hot from the oven. If you’re a Sunday bruncher, these same popovers are topped with a twist on eggs benedict and are not to be missed!

Service is both polished and professional—a welcome anomaly in this busy tourist area—and the bar specializes in classic cocktails served in an environment conducive to quiet conversation among friends. The restaurant comprises most of the hotel’s public lobby space so the dining room and the lounge blend seamlessly into one another. While many South Beach steakhouses pump up the volume to create a scene, LT Steak & Seafood is far more relaxed with a dress code that flexes from resort wear to business casual for many patrons.

One of Miami’s most remarkable dining experiences, NAOE offers guests a journey through the unique tastes and textures of fine Japanese Omakase dining. The restaurant is a tiny space with minimal decoration and seats just a handful of people who reserve weeks in advance for one of two seatings each night at 6pm or 9:30pm. There are no walk-ins available. Request one of 5 seats at the sushi bar for the opportunity to watch Chef Kevin Corey handcraft each of the main dishes served in a traditional bento box and then a progression of perfectly wrought pieces of sushi that arrive one by one so that guests can appreciate the delicate flavors of every type of fish.

Truly a special occasion restaurant, dinner at NAOE can last up to three hours and starts at $160 per person with an additional charge for sake, sushi and gratuity. The small space is designed to focus attention away from the world and zero in on the meal itself with seafood being the star of each night’s menu. Perhaps the most important element of the NAOE experience is that every person in the room made an extraordinary effort to be there, which makes this an exceptional culinary adventure provided by a truly dedicated team. 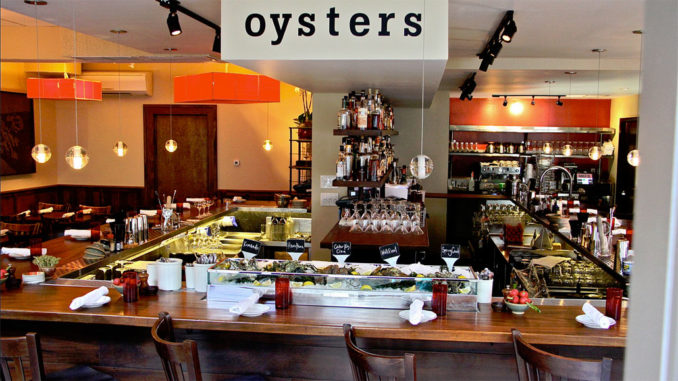 Once a quiet destination for local interior designers scouting exclusive furniture showrooms, Miami’s Design District owes much of its new-found popularity to Chef Michael Schwartz who opened his farm-to-table American bistro in the heart of the area and brought countless hungry foodies to Midtown. While other eager chefs soon followed, Schwartz remains the Godfather of Miami’s burgeoning culinary scene. Proving his commitment to the area, he has since opened The Cypress Room, an “Elegant American” restaurant along with Harry’s, a wildly popular pizza joint. Laid back and local, Michael’s restaurants give the Design District a more accessible neighborhood vibe.

Crafting his menu with seasonal selections from area farmers, the kitchen sets out snacks, small plates and larger entrees for lunch and dinner and serves a top-rated Sunday brunch. Menu standouts include the wood roast double yolk egg served with gruyere cheese and a sourdough crostini and the tender grilled pork chop served with tart plum chutney. Partnering with James Beard nominated Pastry Chef Hedy Goldsmith, Chef Schwartz ensures that each meal dazzles from start to finish. Locals gather for half priced cocktails, wine & beer at happy hour weeknights from 4:30-6:30pm. Dine indoors or book a table out on the breezy patio where table hopping and people watching is tops in town.

Chef José Mendín is a five-time James Beard Award Nominee thanks to his Asian-influenced, Latin-tickled gastropub dishes. His Puerto Rican roots live through the mofongo while Eastern inspirations are channeled deliciously in the udon carbonara. The corn soup agnolotti is also a foodie favorite. In a city that his head-spinning in its diversity, Chef Mendín delivers a restaurant—and menu—that we deserve.

Chef José Mendín is a five-time James Beard Award Nominee thanks to his Asian-influenced, Latin-tickled gastropub dishes. His Puerto Rican roots live through the mofongo while Eastern inspirations are channeled deliciously in the udon carbonara. The corn soup agnolotti is also a foodie favorite. In a city that his head-spinning in its diversity, Chef Mendín delivers a restaurant—and menu—that we deserve.

One never forgets their first time at Bazaar. It’s less a meal and more an interactive performance, a dinner with a playful spirit that’s rarely anything but mind-numbingly delicious. Two dishes that perfectly exemplify this have to be the salmon and lox and the foie gras PB&J. What the small plates lack in size they make up for in flavor. And while nitrogen usage isn’t groundbreaking anymore, we’re a sucker for the tableside LN2 caipirinha under the restaurant’s wonderfully gaudy chandelier that never gets old.

Xperiorlist helps many small businesses get found by more customers.